Happy Halloween, corporate yogis. To get things off to a peaceful start, I'm posting one of our Digital Guru files. After all, even though we say there are 24 hours to each one, you never really know how long a day will be. And with a whole lot of witching to look forward to tonight, you might as well make sure you're off to a great start! 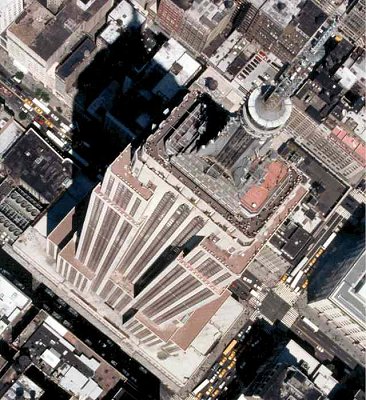 With the recent increase in reports of construction-related accidents and fatalities, the Tower of Babel has been on my mind. If you're rusty on your biblical allegories, this is what wikipedia has to say about the story:

According to the biblical account, Babel (Babylon meaning "gate of god") was a city that united humanity, all speaking a single language...The people decided their city should have a tower so immense that it would have "its top in the heavens." (וְרֹאשׁוֹ בַשָּׁמַיִם). However, the Tower of Babel was not built for the worship and praise of God, but was dedicated to the glory of man, with a motive of making a 'name' for the builders: "Then they said, 'Come, let us build ourselves a city, and a tower with its top in the heavens, and let us make a name for ourselves'" (Genesis 11:4).


So the story ends that God gets pissed and makes it so that no one can understand eachother - hence the modern word "babble" which basically means speaking nonsense. The building fails and the great society scatters into factions all over the earth. Digging a little further, it turns out that just about every culture has some form of this story, all with the advisory that when we work or strive to achieve for the purpose of satisfying our ego, we cannot sustain connection or communicate with eachother and society fails.

Gives pause to think, doesn't it, or am I babbling?
Posted by Tevis Rose Trower at 7:41 AM No comments: 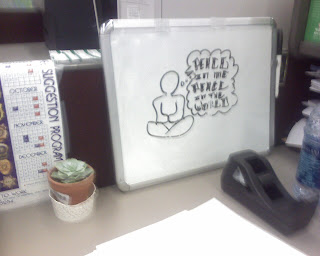 In 1993 there was a study conducted to measure the effectiveness of meditation in lowering the HRA (homicides, rapes and assaults) crime rate in Washington DC. The results: a 48% drop...in a direct quote from that report:

"Based on the results of the study, the steady state gain (long-term effect) associated with a permanent group of 4,000 participants in the Transcendental Meditation and TM-Sidhi programs was calculated as a 48% reduction in HRA crimes in the District of Columbia."

What can you do to change the world? Based on the findings of that study, it's not a bad idea to just sit there. But I mean REALLY just sit. There.

Or in the case of one humble everyday guy in New York City, remember that the world you have to change is the one within you. You may not be able to read the writing in that photo above, but it says "Peace in me, Peace in the world." The amazing thing isn't just that this ordinary guy took the time to draw this reminder on a little white board in his office. Let's face it, many of us do have little reminders of our greatest selves at work. What is so completely fantastic is that this little white board is sitting on his desk in a cubicle in the middle of what is the heart of the offices of the world's finest police force.


This humble everyday guy, a police officer, father and local-grown Queens boy, not only had the inspiration to draw this and the courage to put it on his desk in plain view of the officers with whom he works, but when asked what made a meditator and guy with the word "sangha" in his email address join the police force, you know what he says? "When the last government job I had ended, I asked myself 'what would be the ultimate place where I can serve?'".

What a yogi.
Posted by Tevis Rose Trower at 8:23 AM No comments:

The best surprises don't come in little velvet boxes or brightly colored paper. They are moments of grace, of presence in which we allow ourselves to be present to events unfolding without judgment, expectation or any other limiting thought. Visiting my family in DC this past weekend I was graced with exactly this experience in which doing a favor for my little sister meant going down to the Mall to check out some art for her Art History class. Imagine my delight to walk unexpectedly into an exhibit of Hindu art at the Sackler Gallery called Garden & Cosmos.
Like most yogis I am a sucker for any form of cosmic consciousness - art, music, plays, conversations. But even my stepmother who confesses having no love for Hindu art was really absorbed in the display and altogether we spent over two hours in the three gallery rooms. Uncovered in Jodhpur, the pieces date from the 17th century, and explore a lineage of three maharaj's - looking at their wealthy lifestyles, their political intrigue, and finally, their relationship to a group of tantric yogis called Naths who were very powerful in the Mahal region at that time. Whether you dig the exploration of deities, you are curious about architecture and design, or you love the artistic expression of the ineffable, all together it's a show not to be missed. The audio tour is a bargain at $5, as the current maharaj of Jodhpur shares family stories and observations pertaining to the collection.
You can catch it now through January 4th, with little interactive presentations, storytelling and music on most weekends.

Posted by Tevis Rose Trower at 10:50 AM No comments: 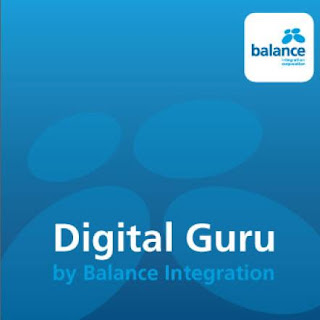 Since we first fantasized of taking yoga into corporations we've dreamed of offering office-appropriate desk stretches and powerful clarity breaks. If it's true that timing is everything, I can't imagine a better time for such a toolkit to be available to professionals everywhere.

So Ta DAAAA...I am beyond thrilled to say we're finally launching our Digital Guru series of exactly that! We're kicking the series off with three short, effective files to help you feel better, and three to help you think better. Check out our media page to see what they're all about - and stay tuned for more as we are definitely just getting started!
Posted by Tevis Rose Trower at 10:59 AM No comments:

Hi Corporate Yogis! This blog was created for corporate professionals with a yoga/meditation practice. Whether it's an especially challenging or blissfully easy day, come here to share insights, challenges and observations on the power of keepin' it real by using your practice in being effective at work.