Aye, Nay or OM: Yoga's Place in the Mainstream 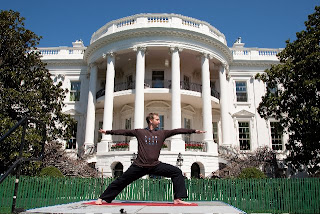 Unless you're a fairly engaged yoga teacher, you may not have noticed something is changing in yoga: we're being mainstreamed. It's not only evident from the number of people you can see bopping around any community with a yoga mat on their back, sporting sanskrit symbols on cars, t-shirts and jewelry. While mother India goes Bollywood, the proliferation of her timeless spiritual practices has almost half of the United States wrestling with how yoga should formally participate in the collective.

Most yogis will admit we've wanted it, talked about how we wish everyone had a yoga practice of some sort. Who within the yoga community hasn't sighed at the idea of the houses of the U.S. Congress "OM"ing to open session, Sri President Obamananda scuttling his Marlboro's in favor of nadi shodana pranayama, Hillary Clinton or Sarah Palin checking in with supta baddha konasana/goddess pose before taking the stage, or held some other fantasy about yoga's ability to offer deeper connectedness and clarity to the folks who emerge as our loudspeakers and decisionmakers. As someone who adapts and shares the tools of yoga within corporate environments, I know beyond a doubt it would certainly be for the good.

Fantasies aside, and perhaps part and parcel to their ever becoming reality, the other side of mainstreaming is also happening. Yep. Just when yoga began to show numbers of participants that would make ANY business sit up and take notice, the states are taking notice and wondering what this means from many angles. As the American Bar Association Journal reports, twenty-one states are looking at yoga with an aim to regulate and somehow define this practice. Yoga proponents are on the scramble, responding with petitions, letters, hiring lobbyists, talking to senators, citing First Amendment rights and generally worrying over how a practice-turned-business that offers dubious profitability to all but a very small percentage of us can bear the increased cost to serve of meeting bureaucratic requirements that will no doubt result from the regulatory push.

What the states say they are worried about: mostly students buying trainings or memberships from organizations who vanish in the night without any path or recourse. What studios are worried about: registration fees in the thousands of dollars to qualify as a registered school, bureaucratic headaches of filings and paperwork, and being told what to do by the government.

Panic aside, this is an inevitable moment. Embedded in this moment are questions including: is yoga a religious practice, is it a therapeutic modality, is it simply a form of exercise, how is it valid, is it taxable, is it a vocation...and no doubt the list goes on. No matter how we define the "everything" tool that yoga fans know the practice to be, that yoga holds irresistable outcomes for so many of us and can be adapted to give benefit no matter the proclivities of the practitioner simply means this moment HAD to eventually arrive. With a capacity for ubiquitous relevance, our beloved Everything Tool has been destined to gather the popularity and prominence that the regulatory push signifies.

Sitting with this inevitability, I'm thinking of lots of pros and cons to this particularly sticky aspect of the mainstreaming of yoga. One cause for consideration: Yoga teachers have never been formally validated by the medical community - ask anyone in Donna Karan's Urban Zen Teacher Training and they'll attest to the frustrations of taking a training that was marketed as integrating yoga-based modalities into medical settings only to find out that any contact with real patients is actually not permitted. Another cause for consideration: Yoga teachers in many states are actually not legally permitted to touch students - that means hands-on adjustments or therapeutic touch of any kind is illegal unless the teacher is liscensed for some other profession such as Massage, Occupational Therapy, Physical Therapy, etc. Sure, yoga teachers can study for thousands of hours with therapeutics masters of multiple lineages, but because they are not recognized by state & local governments that they exist at all is the result of being "under the radar" - that is until now.

So if this is an inevitable moment, if the question "what IS yoga" is finally coming to the crown chakra attention of the mainstream world, we need to be the yogis in this moment. We need to ask ourselves what this means at the mula/root, at the solar plexus, what yearning rises from our anahata and how our voices give this truth expression. We need to step with wisdom beyond the veils of illusion and separation that we were ever separate from this world and know that we have always been spiritual beings on a human journey - in this world if not of it. We need to consider ourselves Arjuna in the chariot hearing Krishna's admonishment that we cannot retreat from the power struggles or machinations of this world into a spiritual coccoon. Indeed, because we are yogis in this world we must thoughtfully find how we powerfully serve in relationship with it and negotiate terms that best allow us to do that.

What can change: everything. It always is anyway.
Posted by Tevis Rose Trower at 12:19 PM 5 comments:

Happiness or something else?

I've been watching the surge in happiness psychology offerings - the websites, the coaching programs, the university degrees. Seeing the proliferation of interest and academic intelligence about happiness raises questions around the measure of a life - is it happiness or is it meaning? Is it something else entirely? To the nihilists and even the tantrics, there may be nothing at all, no valuation differentiating between one lifetime and another. What would the likes of karma yogis such as Dr. King or Gandhi say? What do you think?
Posted by Tevis Rose Trower at 11:44 AM 1 comment:

Hi Corporate Yogis! This blog was created for corporate professionals with a yoga/meditation practice. Whether it's an especially challenging or blissfully easy day, come here to share insights, challenges and observations on the power of keepin' it real by using your practice in being effective at work.